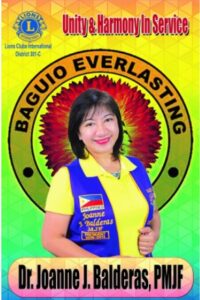 Dr. Balderas started her volunteer work in 1994 during her residency training in Ophthalmology, bringing back sight to our underprivileged brethren in Lions Sightfirst Cataract missions.  She was sought by the Lions, which she joined in 1998 and later organized Sightfirst Eye Camps throughout District 301-C Northern Philippines, as Sightfirst Campaign Chairman for three consecutive years back in 1999, until the closure of the Philippine Sightfirst Phase 3 Grant from Lions Clubs International Foundation (LCIF).

Having spent almost half of her life in service for the blind through the Lions Clubs International, Dr. Balderas was awarded as Outstanding Citizen of Baguio in 2017 and National Volunteer Awardee-Individual Adult Category in 2018.

Dr. Balderas has also been a Lion leader through these years, has led her club to recognition as Outstanding Volunteer Organization (Non-Profit Category) in the Cordillera Administrative Region in 2012, during her transformative three-year Club Presidency from 2010-2013.

Given the opportunity to lead the Lions Clubs in a top Lions district position, Dr. Balderas plans to strengthen all 40 clubs of the district and promote UNITY and HARMONY in SERVICE, promoting and nurturing camaraderie among Lions while serving our communities.

She plans also to further her cause, to promote INCLUSIVITY (I)  for all Lions – to open opportunities for training, leadership, and access to available resources;

to promote ACCOUNTABILITY (A) for Lions in top leadership positions; to be a CHANGEMAKER (C) to transform our District 301-C for the better, and to promote TRANSPARENCY (T) in district leadership.

In a nutshell, Dr. Balderas encourages each Lion to embrace  “I ACT!” and vote for change to realize new goals yet to be achieved.

E-jeeps, cars “not yet viable” in Baguio, Cordillera according to tests

No Result
View All Result