He takes a second look at that overlooked date – or probably, a third-look? after President Diosdado Macapagal moved Araw ng Kalayaan to June 12, 1898 (dumping 4th of July 1946, first chosen by our colonizer USA.)

Thanks to never-ending re-valuations by historians, forgotten dates get rescued from the trash bin of history. Re-contextualizing old data, debunking hand-me-down history (written by our colonizers) is why we need continually to ukay-ukay history.

Let’s look at another national holiday we celebrated recently- Araw ng Kagitingan.. Yearly we celebrate April 9- the Fall of Bataan. Yes, let’s honor the bravery of our aging veterans – with monuments, and parades, and support for their fight for Veterans backpay. (After all, didn’t General Macarthur brag, “Give me 10,000 Filipino soldiers and I can win any battle?”) Kadakilang walang ka-pantay.

Fight for whose Freedom?

But weren’t they fighting a war of our colonizers (or for the hubris of their generals.) We didn’t just inherit Yankee culture (salamat sa Benevolent Assimilation.) We also inherited the enemies they created as an emerging world power. Alliances with the USA continue – call it by any other name: SEATO, VFA, APEC, TNgA (Tuta Ng America) or more gracefully,  BFFngA – damay ang Pinoy sa rambol ni big brother Rambo.

The symbolism of April 9, 1942 fails in comparison with that of April 27, 1521. It remains very much a colonial holiday. Why highlight the Fall of Bataan rather than the victorious indios bravos at Mactan? The victory over Magellan’s technological might (cannons, armor and Toledo-forged swords) was sobrang klaro! 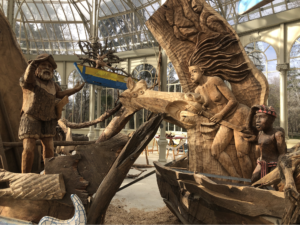 Tagumpay sa Mactan! Recorded for posterity by an enemy scribe Antonio Pigafetta. He acknowledges objectively the Spanish retreat – while subjectively lamenting the tragic loss of Magellan – “our mirror, our light, our guide.” (Yes, Ukraine’s battle of Mariupol will be recorded either as a glorious victory or a butcherous bullying – depending on who hired the cameras at the battlefield.)

Pigafetta’s memory failed to publish many details. Remember, his hand-written manuscripts were left behind with King Carlos I in Villadolid (who favored the chauvinistic accounts of Sebastian ElCano.) Pigafetta reconstructed his memoirs in Italy – published three years later as “The First Voyage Around the World.”

The book often betrays the compassionate and artistic curiosity of Pigafetta. Strict historians zero-in on Pigafetta’s infatuation with Magellan. For his romantic journals (aka un-academic) one can admire his subjectivity when he zooms-in on local culinary taste, native words of anatomical parts, and sympathetic insights into lifestyles of “others.”

Allow this artist, reviewing the finale at Mactan to add “observations.” Not to rival Pigafetta’s first person accounts. But as a hindsight framer 500 years later, I would dare to include some oral traditions from the folklore of Cebuanos today.

Aiming the Camera at Cultural Details

Understandably the retreating Pigafetta was pretty vague on the details of the final mano-mano combat. Might a chronicler (less-starstruck) have recalled cultural nuances of the fight? Might he have noted the Mactan warriors, in last hand-to-hand moments – resorting to sariling-atin martial arts, pulling out their arnis sticks? 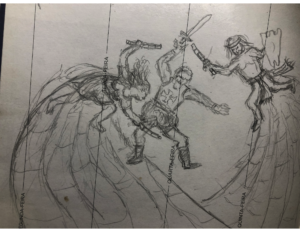 Might he have noticed the combatants included women – furiously defending their lifestyle from bearded extraterrestrials? (Trivia: My Quincentennial installation in Madrid last Oct 2021, depicted the 1521 Mactan scenario, wherein I included Bae Bulakna, the wife of Lapulapu using arnis sticks. The conjugal pair overwhelms the armored Magellan. A gender-balanced  victory!)

Earlier, when Magellan ordered Mactan huts burned, might Pigafetta have observed that villagers of all ages – young maidens, kids, and even senior citizens – too frail to be frontliners in the Mactan rambol – had mobilized themselves into fire brigades (mag-igib ng tubig) to help put out the fires? Perhaps it wasn’t just macho warriors determining history?

Such details could have portrayed more of a cultural victory – if the lightning-swift arnis sticks (home-grown kali-arts weapons in pre-colonial Cebu) had been picked up by Pigafetta’s camera eye.

Teka muna! Is this artist rewriting history? OK, forget those what-might-have-been details (as Ambeth calls them.) Anyway most academics classify these digressions as dilitantic history writing. Or, gently relegate them as poetic license of an essentialist.

Balik sa objective pag-timbang ng April 27 vs April 9 – bilang Araw ng Kagitingan. Palibhasa, just as the valor of the Bataan defenders is well documented, so also the Victory of Mactan is solidly recorded (although Pigafetta described the Mactanese as savages.) Sobrang tapang ng freedom-fighters, in both wars – all academics agree. 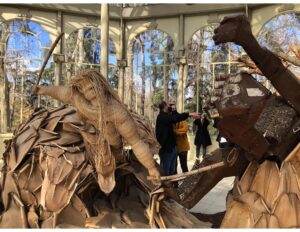 But let’s look at the symbolic layer: Whose war was being fought?  Was it our warriors fighting for our independence against colonizers? Or were soldiers fighting kapit-bisig – arm-in-arm with our colonizers – embroiled in their war?

Are we just splitting hairs? Or is it a significant issue that can tip the scales on which date to celebrate? Sariling away ba natin? O napasubo lang sa rambol nila?

Surely, April 27 was our victory in our war, diba? April 9 was their surrender – after we risked our lives fighting their war. Malinaw ang pinaglabanan: … sa manlulupig, di ka pasisiil – diba?  So, why not move that national holiday to April 27?

A Wish for the Lapulapu Time-Capsule

The Quincentennial fireworks commemorated the Victory at Mactan, our first recorded repulsion of foreign invaders. I had hoped President Du30 would declare April 27, 2021 as a national holiday (hindi lang sa Cebu). Sayang. We missed a chance to cannonize Lapulapu as a nationwide bayani in the jubilee year. Pero it’s never too late. 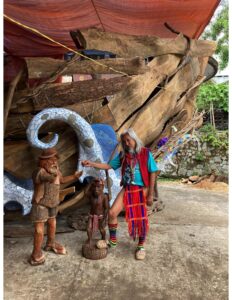 The 501st anniversary was to be celebrated in Mactan with a time capsule laid for the Lapulapu Memorial Shrine and Museum. Expect in 2025, a Lapulapu statue, taller than Magellan’s monument. That’s a wish – Idolo-ko-si-Lapulapu – Pres. Du30 expressed.

The humble wish of this artist was simple: sana, sa loob ng time-capsule, kasali isang presidential proclamation, declaring April 27 Araw ng Magiting. From an outgoing president, such a farewell salvo could have been more spectacular than all the fireworks in Ukraine, or the Olympic pyrogenics at the Beijing Olympics, di ba?

Paragliding, paramotor eyed in La Trinidad by next year

Hidilyn to tie knot in Baguio on anniversary of winning Olympic gold, Leni among the ninangs

FACT CHECK: “Astronaut pills” can be mass-produced to feed the poor #FactsFirstPH

FACT CHECK: BENECO is a milking cow for the CPP-NPA-NDF #FactsFirstPH

No Result
View All Result